WELCOME ADDRESS BY THE EXECUTIVE SECRETARY, CS-SUNN BEATRICE ELUAKA DURING A MEDIA ENGAGEMENT ON PINNS ISSUES, RESEARCH FINDINGS, PROGRESS AND CALL TO ACTION TO INCREASE SALIENCE OF NUTRITION POLICY AND FUNDING ON THE AGENDA OF THE LAGOS STATE GOVERNMENT ON 29TH OF AUGUST, 2018 IN LAGOS STATE. 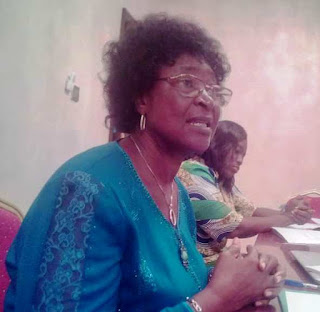 Distinguished Members of the Press,
It is indeed my pleasure to welcome you to this media engagement on the Partnership for Improving Nigeria Nutrition Systems issues, research findings, progress and call to action to improve salience of nutrition policy and funding on the agenda of the Lagos state government, holding today at Grandbee Hotel, Lagos State. I wish to convey CS-SUNN’s appreciation to you, members of the press for responding positively to our invitation.

Malnutrition remains a key contributor to infant and maternal mortality and morbidity, poor cognitive development, increased severity of diseases which adversely affects productivity in Nigeria. According to the National Demographic Health Survey (NDHS) 2013, more than 5 million new-borns in Nigeria lack essential nutrients and antibodies that would protect them from diseases and death as they are not being exclusively breastfed.

These negative results indicate an alarming rising trend in Nigeria’s malnutrition burden which will continue to further impede the nation’s economic development if not checked as globally, stunting is currently an indicator for measuring a country’s development.

Despite these negative indices, we however must not fail to commend the Lagos State Government for extending maternity leave for female civil servants to 6 months and introducing a 10-day paternity leave for fathers. This policy is a step in the right direction towards promoting Exclusive Breastfeeding which ensures optimal physical growth and brain development of children, engenders them to thrive well and live up to their full potentials at adulthood. It also prevents malnutrition.

We are therefore calling on other state governments in Nigeria to emulate the Lagos State Government as this will contribute to encouraging the practice of Exclusive Breastfeeding especially among working mothers thereby boosting Nigeria’s EBF rate and contributing to a reduction in malnutrition in the country.

Recently, at the just concluded Ministerial Press Briefing in Abuja to commemorate the 2018 World Breastfeeding Week, the Honorable Minister of Health, Prof. Isaac Adewole revealed that the Ministry of Health was working closely with the Ministry of Labor to extend Maternity leave in Nigeria from 4 to 6 months. We are urging the Ministers and other key stakeholders involved in the process of implementing this policy to fast-track the process of this extension as it will go a long way to encourage and boost Nigeria’s EBF rates which will contribute to a reduction in malnutrition.

The Partnership for Improving Nigeria Nutrition Systems (PINNS), a product of consultations between a Donor/CS-SUNN is targeted at strengthening the Nigeria nutrition systems to be more Result-driven, Effective, Serviceable, Efficient and Transparent (RESET) in delivering on their mandate. It is also aimed at holding government accountable on commitments made to allocate, release and use transparently funds for implementation of high impact Nutrition interventions in Nigeria through evidence-based advocacy.

This project will also contribute to a reduction in malnutrition particularly among women and children in Nigeria as is focused on strengthening governance, policy implementation, effective coordination, financing, building the capacity of state actors, generation and effective communication of evidence as promoting accountability.

The Civil Society Scaling -Up Nutrition in Nigeria (CS-SUNN) recognizes that the Media are instruments of mobilization, awareness creation, information exchange and dissemination and that they have a great role to play in setting nutrition as an agenda for public discourse. Without the media, it might be difficult for CS-SUNN and others stakeholders in the nutrition circle to communicate nutrition information and monitor nutrition interventions to ascertain optimal delivery of benefits to Nigerians especially, the vulnerable women and children in Lagos state.

3.     Securing buy-in of media for smooth implementation of PINNS in Lagos.
4.     Increasing salience of PINNS and nutrition issues among Media in Lagos State.
This engagement will further jumpstart CS-SUNN’s media team in Lagos State with a common understanding of the goal and objectives of the project.

We therefore urge the media to step up reportage of nutrition issues to inform and spur policy makers and concerned stakeholders to take the right steps that will curb malnutrition in Nigeria, particularly Lagos State. We would on our part, continue to equip members of the press with useful and relevant information that would help and enable them step up thorough and factual reportage of Nutrition.

On this note, I welcome you all again to this Media Engagement on PINNS. We look forward to a most successful engagement with members of the press. 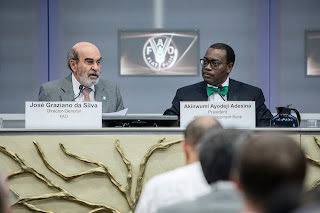 27 August 2018, Rome - The African Development Bank (AfDB) and FAO today agreed to boost joint efforts aimed at catalysing agriculture sector investments in Africa to end hunger and malnutrition and increase prosperity throughout the continent. In terms of the agreement, the AfDB and FAO are committed to raise up to $100 million over five years, to support joint partnership activities.
Specifically, the new strategic alliance seeks to enhance the quality and impact of investment in food security, nutrition, social protection, agriculture, forestry, fisheries and rural development.
AfDB President Akinwumi Adesina and FAO Director-General José Graziano da Silva signed the agreement, which builds on a longstanding collaboration between their organizations, at the UN agency's Rome headquarters.
"FAO and the AfDB are deepening and broadening our partnership to assist African countries achieve the sustainable development goals. Leveraging investments in agriculture, including from the private sector, is key to lift millions of people from hunger and poverty in Africa and to ensure that enough food is produced and that enough rural jobs are created for the continent's growing population," said FAO Director-General José Graziano da Silva.
AfDB President Akinwumi Adesina said: "The signing of this supplementary agreement is a milestone moment in the relationship between the African Development Bank and FAO. It signals our joint commitment to accelerate the delivery of high quality programs and increased investment for public-private-partnerships in Africa's agriculture sector. This will help us achieve the vision of making agriculture a business, as enshrined in the Bank's Feed Africa strategy."
The Bank's Feed Africa strategy, launched in 2015, targets to invest $24 billion into African agriculture over a ten-year period. The aim is that of improving agricultural policies, markets, infrastructure and institutions to ensure that agricultural value chains are well developed and that improved technologies are made available to reach several millions farmers.

A programme of action
The strengthened partnership between the AfDB and FAO envisages a collaborative programme of action with a series of outcomes, including: better and more effective AfDB financed investment operations; increased public-private-partnership investments; a better investment climate and portfolio performance; and, advocacy and joint resources mobilization. FAO's technical assistance would cover areas such as sustainable agricultural intensification and diversification, scaling up value chain innovations, youth in agriculture and agribusiness, agricultural statistics, climate smart agriculture, blue growth/blue economy, food security and nutrition, agri-food system, food safety and standards, women's economic empowerment, promotion of responsible private investments, resilience and risk management and capacity building for transition states.
The collaborative programme would be created through an initial financial contribution of up to $15 million by the two institutions.
Joint advocacy and policy advice activities will include the promotion of the Voluntary Guidelines on the Responsible Governance of Tenure of Land, Fisheries and Forests and the Principles for Responsible Investment in Agriculture and Food Systems, both endorsed by the Committee on World Food Security.
The collaboration between the AfDB and FAO began in 1968. Since then, FAO has provided technical assistance to the formulation of 161 AfDB financed projects, valued at over $3.7 billion representing about 21 percent of AfDB's support to the agricultural sector.
Recent collaboration between the Bank and the FAO include project formulation support in Tanzania and Equatorial Guinea; technical assistance for the development of Blue economy programmes in Côte d'Ivoire, Morocco and Cape Verde, feasibility studies for agricultural transformation centres in Zambia, Tanzania and Côte d'Ivoire; and participation in the African Leaders for Nutrition initiative.
The Bank and the FAO have also contributed to a series of continental dialogues on post-harvest loss reduction, and the Great Green Wall of the Sahel and Sahara Initiative.

Cairo, August 11, 2018 – Recognising the debilitating effects of hidden hunger, African governments and stakeholders have over the years been implementing several strategic interventions. Among the interventions are food fortification, dietary diversification, vitamin and mineral supplementation, public health interventions such as deworming and of late, biofortification.

As part of their efforts to promote Food and Nutrition Security for Sustainable Agriculture in Africa, the Forum for Agricultural Research in Africa (FARA) and the New Partnership for African Development (NEPAD), organised a one-day high level advocacy event the Pan-African Parliament (PAP) in in Cairo, Egypt. During the event, it was noted that increased efforts and support from governments and stakeholders to improve nutrition and food systems are still needed. ‘Embracing food-based approaches including biofortification in national and regional agriculture and nutrition policies, strategies, programmes and investment plans,’ was the theme of this event.

H.E Hon Kone Gognon, Chairperson of the PAP Committee on Agriculture opened the meeting and stressed that the theme for the meeting was pertinent, with a focus on ensuring food and nutrition security. He pointed out that biofortification was already flagged as crucial in Africa.

Speaking on behalf of the FARA Executive Director, Dr Abdulrazak Ibrahim stated that FARA recognises the debilitating effects of hidden hunger, and highlighted FARA’s efforts, over the last years, in mainstreaming FNSSA within the National Agricultural and Innovation System (NAIS).

This was echoed by Dr Rose Omari, from FARA’s Building Nutritious Food Basket project, who elucidated the fact that micronutrient deficiency and its consequences are not widely known, as this is ‘hidden hunger.’ “Therefore,” Dr Omari said, “Enhancing micronutrients content of staple crops during production is a critical intervention.”

Ms Bibi Giyose, Senior Advisor on Nutrition, spoke on behalf of the NEPAD Agency’s CEO, Dr Ibrahim Mayaki. She brought to the fore the fact that nutrition should not be viewed as a technical issue, as it also has political, structural and numerous other dimensions that dictate the need to find multi-sectorial solutions.

Prof Francis Zotor from the University of Health and Allied Sciences and African Nutrition Society, expressed a similar sentiment with a call to strengthen synergies in moving the nutrition agenda forward on the continent.

It was concluded that while hidden hunger is real, reversing it is also possible. Increasing micronutrient content of commonly consumed foods through biofortification, especially to improve nutritional status of low income households will go a long way in redressing hidden hunger. African Parliamentarians were called upon to follow up on declarations made by governments to ensure their implementation.